The old Roman town of Herend sits amongst the hills of northern Hungary near the city of Veszprem. The Herend factory, one of Europe’s finest porcelain manufacturers flourishes in the town.

Founded in 1826 to produce earthenware products it struggled until 1839 when Moric Fischer took over the factory and perfected the art of porcelain manufacture. A man of great vision he looked to emanate the great factories of Germany and produce dinnerware to rival Meissen. He began with commissions to make replacements for some of the existing Meissen, Sevres and Vienna services owned by the aristocracy throughout Europe. Their ability to imitate the first masters of Europe soon gained Royal Patronage from the monarch and gave Herend the right to use the Coat of Arms of Hungary. Other Royal Patronages soon followed. At the World trade fair in London, Queen Victoria purchased a dinner service decorated with butterflies and flowers in the Chinese style, this service is still produced today as Victoria. Many aristocrats followed Queen Victoria’s example and Herend continued to prosper.

Moric’s grandson took control of production in 1897. He led Herend into the twentieth century on a new wave of success. Old services were reintroduced as well as new sculptures on Hungarian and Oriental themes, animal figures, medals and busts of prominent personalities.

After the second world war the company was nationalised and a new group of Hungarian artists arrived in Herend, bringing their refined skills in sculpture and painting to the factory.

After the fall of communism in Eastern Europe the company was privatised and is now owned by the management and its workers. Herend has continued to update its facilities without sacrificing the traditions of the highest quality hand painting and gilding inherent in all their porcelain.

2013 and Herend celebrates 184 years of the consistent production of hand crafted luxury porcelain.

Technically the only true porcelain is a hard paste porcelain of the type made in China for hundreds of years. The body consists of a mixture of Kaolin, Feldspar and Quartz.

I) Kaolin: a white china clay

II) Feldspar: china stone, a translucent glass like material that that fuses the materials together during firing.

III) Quartz: sand, is used to reduce deformation and shrinkage.

The raw materials are mixed with water to form a liquid clay or slip. Impurities are removed using electromagnets and most of the water is extracted to produce a solid clay body for hand or machine forming. Originally some items were thrown on a potter’s wheel or pressed onto moulds to ensure uniformity. Although manufacturing methods have changed very little since the nineteenth century, semi automation for most of these processes has taken over.

Objects such as teapots, vases, jugs and figures are made by pouring slip into plaster of paris moulds. The resultant casts are removed from the moulds assembled using more liquid slip and the rough edges smoothed away. Several moulds can be used to make up a complicated piece.

After assembly the object has its first firing.

Following the biscuit firing the object is ready to glaze, either by dipping or spraying with liquid glaze. The glaze becomes clear and bright on firing.

Each piece is then hand painted and fired for a fourth time.

Gilding and Burnishing; this is the final process in ceramic manufacture. Hand gilding, gold is applied by brush, then fired for a third time and burnished.

The trademark printed onto the base of all Herend porcelain is a shield taken from the Royal Coat of Arms of Hungary. There are many variations of the mark. An impressed shield was also used in the early years. Easily split into two groups, the marks can be defined as pre 1948 or thereafter when the communist government took over.

Pre 1948 there was a crown on top of the shield, with or without words around it, and sometimes a date under it. Post 1948 the crown was replaced by the letters HP atop the shield, plus a model number and date of manufacture

For example the letter A for January and 94. B is February and so on.

More recently painters initials have been added to the base and since 1996 a 1st Edition mark has been printed on all fishnet designs for the first year of their production.

For nearly two hundred years it is the design artists, potters, painters and modellers who have perfected their craft and mastered the smallest details to produce the splendid porcelain products we identify today as Herend. It is they alone who add the value to this porcelain. 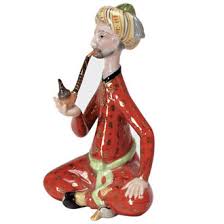 Visit the Herend factory in Hungary